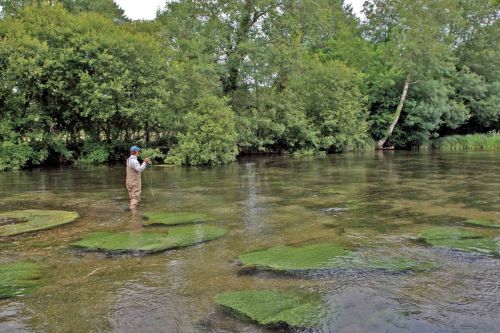 River Alre (Itchen tributary, Drove Lane beat). This beat is the most downstream stretch of the Alre at the confluence of the rivers Alre and Cheriton Brook forming the main river Itchen. Superb wild trout fishing on private estate water. Only 2 days each week are fished. Well rested and traditionally managed wild trout water.

Bossington on the river Test.
Bossington (middle Test). Also part of British aviation history, Bossington is in ownership of the Fairey family, makers of the Fairey Swordfish aeroplane. This famous private estate fishing is immediately below the hallowed Houghton Club water and offers a super mix of main river Test and carriers. Excellent facilities and full time keepers. The House Beat has the beautiful back drop of the Manor House and lawns.
Bossington, the Wallop Brook (Test tributary). A beautiful river Test tributary. Wild trout and stocked brown trout. Wading required.

We are very proud to say we have over 60 beats in our portfolio, on 20 or so named chalk streams.

Howard
Had a superb day on the Itchen yesterday, report below :_

Weather – Felt more like September than July ! Cloudy with some heavy rain showers, around 15-16 degrees C , strong and gusty westerly wind with about 15 minutes of sunshine all day. The trees were great for sheltering the beat from the wind

River – due to the Spring drought running low – but beautifully clear

Steady hatch of BWO from late morning onwards. Little bursts of activity late morning, early afternoon and late afternoon. Spinner return at around 8PM before rain stopped play. Some very large sedge flies around which got the fish excited, but very few and far between

I lost count. As an estimate around a dozen Grayling and a dozen Brown Trout, but probably a lot more.

Had one really large Grayling. My biggest since fishing the Test at Wherwell last November. In its prime in a few months would be 3Lb+. Had one even larger shake the hook out – Language was appalling.

Very long and fine fluorocarbon leader. My Marryat 10 foot number 4 rod is superb for this. Very slow wading, waded the beat twice during the day.

I used the induced take as per Frank Sawyer & Olive Kite.

I can understand why Skues was ejected from the Abbots Barton syndicate. If I had dry fly fished only it would have been a tough, whereas with the induced take nymph fishing I had a superb day

Despite the weather I thoroughly enjoyed my Day, I have never fished the Itchen above Abbots Barton before (and mostly below Winchester) and what a superb river it is. Not spoiled by dumb stockfish, challenging and a beautiful environment. My usual Wiltshire Avon tactics and flies worked a treat. Having been fishing the chalk streams for 23 years I knew what to expect, however a inexperienced fisher may have found it challenging

Had two young ramblers wandering down the path at one stage. Pointed out to them they were on private land and they were upsetting my fishing. They apologised and moved on.

I can recommend fellow anglers visiting this stretch to read the Ron Holloway’s book. You should have been here last Thursday. As River keeper for many years of a stretch just downstream his book is very pertinent and educational
Regards………..Martin