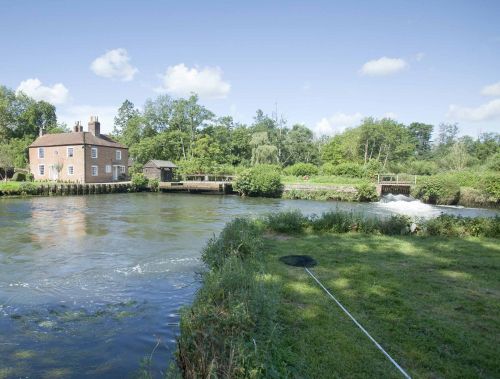 We consider ourselves very lucky to be the stewards of one of England’s most historic Salmon, Trout and Sea Trout fisheries situated on the lower reaches of the famous river Test in Hampshire. The fly fishing history at Testwood and Nursling runs as deep as the chalk bedrock from which the river springs. Similarly, the provenance of the Hardy name is steeped deep in piscatorial history and we have many sepia photographs hanging the walls of our lodges showing anglers of yesteryear fishing with Hardy tackle at Testwood and Nursling.

Recently, the advent of SINTRIX by Hardy has taken the fly fishing world by storm… and this isn’t the first time Hardy have produced a revolutionary series of fly rods. Christening, or should I say re-naming the new rods Jet’ was presenting some big boots to fill.

The original Hardy Jet series of rods were designed by the famed John E. Tarantino. J.E.T – his initials putting his monogram to the rods. Tarantino was an expert rod designer, fly caster and member of the Golden Gate Casting Club of San Francisco. He worked for Hardy designing rods and blanks. From Hardy HQ in Alnwick, Tarantino’s Jet series were produced and sold from 1967 to 1975. Tragically, John was shot and killed during a robbery in San Francisco at the height of his career as an internationally renowned rod-maker.

Very fitting then to take two of the new Jet rods to cast lines at Testwood and Nursling and pay a modern day homage’ to Tarantino’s name. I’m certain it’s not the first time a Hardy Jet has been cast onto these hallowed waters as Head River Keeper, Nick Richards and I put a Trout and Sea Trout rod through their paces in the most demanding flood conditions and gale force winds.

First out of the bag was the beautiful 8′ 6″ #5. The 8′ 6″ length being traditional for these rivers as it bridges a gap between a rod for bank fishing and wading nicely. Even in the high winds its performance shone giving a very smooth delivery. We cast accurately and could feel the line right through to the butt section of the rod. When some punch was required to battle the wind it performed really well but with feeling – the perfect chalk stream dry fly rod. We couldn’t fault its accuracy either. As the finale, as all boys do, we got into setting the little Jet through its paces at distance and we were not disappointed. With gusting winds we threw 45′ – 50′ casts to the opposite bank with ease, expecting the rod to buckle as we brutally pulled a second haul to shoot the line. It picked a long line from the water and returned the energy into the cast beautifully. We can’t wait to get this on a river in the Trout season that isn’t three fields wide!

Next up was the 10′ #7. This is the tool favoured by both Nick and I for daytime Salmon fishing as well as night fishing for Sea Trout. We cast the rod with both floating and intermediate lines and again were suitably impressed. Some 10 footers give a somewhat floppy feel at distance or when using big heavy flies. Not the Jet – what a beauty and great value for money. For night fishing, feel’ through the rod is vital when both casting and whilst the fly is fishing. The rod transferred every little vibration of the fly back to the angler really well – a superb rod.

Congratulations on the new Jet range Hardy – an inspirational series of fishing rods fitting of the Jet name. We are just itching for the season to start!